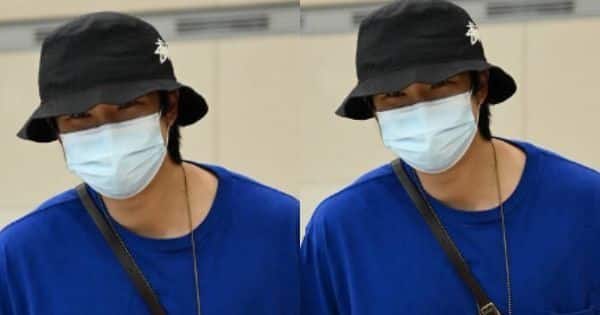 BTS member RM aka Kim Namjoon is back in Korea after a brief vacation in Europe. He was clicked at the Incheon Airport today by the Korean media. The BTS leader looked relaxed in a deep blue tea, cargos and a bucket hat. Kim Namjoon aka RM was totally chilled out, and smiled as he saw the paps. The paparazzi especially the female reporters walked with him till he boarded his car. Throughout he kept on talking with them, as they posed a number of questions. We can sense that there was some banter too as he laughed whole-heartedly with them. RM aka Kim Namjoon was travelling in Europe with a friend and did not have his usual entourage with him. Also Read – Trending Hollywood News Today: Bill Cosby found guilty of sexually assaulting a minor, Amber Heard and Cara Delevingne’s viral kissing picture and more

The rapper, songwriter, vocalist and music producer just carried a suitcase and bag with him. RM was spotted by some fans in Basel, Switzerland and in Paris outside a Korean restaurant. Many speculated that he had done for the Art Festival in Basel, which is a famous all over the globe. A fan got an autograph from him and also made a TikTok video of the same. Likewise, he was clicked outside a restaurant in Paris with his friend. Take a look at the video below… Also Read – Trending TV News Today: Karan Kundrra takes auto ride, Shehnaaz Gill hides her face from paparazzi, Aneri Vajani opens up on dating and more

BTS members announced that they are taking an indefinite hiatus from group music activities. The members will now focus on solo activities for a while. Many feel the impending military enlistment has prompted this move. BTS said that they wanted to begin this new chapter after the release of ON but kept on delaying it keeping in mind the sentiments of ARMY in the pandemic. The group did sold-out tours in Los Angeles and Las Vegas some months back. RM aka Kim Namjoon is working on his third mixtape, RM3 which will see some interesting collaborations. Also Read – Don 3: Latest update on Shah Rukh Khan’s film will leave fans heartbroken