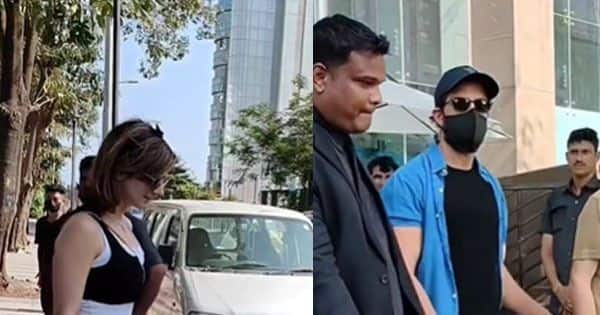 Former couple Hrithik Roshan and Sussanne Khan made sure they spent quality family time together on son Hridaan’s birthday. The couple headed for a lunch with the birthday boy and his brother, Hrehaan. Hrithik Roshan and Sussanne Khan were seen outside Yauatcha in Bandra – Kurla complex. It is one of the best and most expensive places for pan-Asian cuisine in Mumbai. The former couple was dressed identically. Hrithik Roshan wore jeans, denim shirt, white tee and a cap. Sussanne Khan also wore denims with a white sleeveless top. Though they have moved on with separate romantic partners, the couple stay together when it comes to their kids. Also Read – Pooja Hegde reveals having a childhood crush on Hrithik Roshan; was ‘heartbroken’ at Koi Mil Gaya premiere due to THIS reason

During the lockdown, Sussanne Khan stayed with the kids and Hrithik Roshan. The couple got trolled after pics from Goa went viral. Hrithik Roshan was seen with his girlfriend, Saba Azad while Sussanne Khan attended the do with Arslan Goni. The event was the opening of a restaurant the interiors of which was done by Sussanne Khan. Pooja Bedi who hosted the party said that her friends had love again, and were happy in their respective lives with new partners. Arslan Goni is a close friend of Ekta Kapoor. Also Read – CBI 5 The Brain movie review: Mammootty fans praise his performance; call the film ‘decent thriller’

Saba Azad and Hrithik Roshan are one of the most discussed couples on social media. The two became friends through social media. Rumours of the two being a couple started doing rounds from five months or so. It happened after they were seen coming out of a dinner date. Hrithik Roshan recently saw the web series Rocket Boys and lavished praise on Saba Azad saying that she inspired him. The superstar has movies like Fighter with Deepika Padukone lined up. This is their first project. Also Read – Kartik Aaryan’s gesture for Kiara Advani during Bhool Bhulaiyaa 2 promotions reminds fans of Sushant Singh Rajput; they say, ‘Sushant ban raha tha kya’