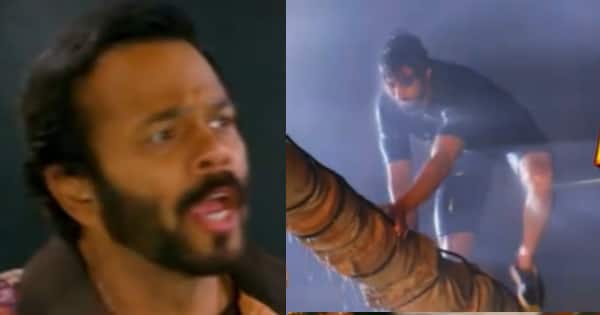 Khatron Ke Khiladi 12 has now reached its grand finale stage. Rohit Shetty’s show started with a big list of contestants like Rubina Dilaik, Shivangi Joshi, Faisal Shaikh, Tushar Kalia, Sriti Jha, Pratik Sehajpal, Jannat Zubair, Rajeev Adatia, Mohit Malik and more have now come down to its top 4 contestants. Reportedly, Jannat Zubair, Tushar Kalia, Faisal Shaikh and Rubina Dilaik make for the top four list. Today and tomorrow would be the grand finale and we will finally get to know the winner. But here is a glimpse of its grand finale task. Also Read – Khatron Ke Khiladi 12 winner: Not Rubina Dilaik, but THIS celeb wins the trophy? Check the prize money and viral video

In a promo video shared by Colors TV, we can see Faisal Shaikh performing a deadly stunt. He could be seen climbing a tree whilst water is being showered on him with full force. He then jumps and bangs his head onto a branch. He falls into the swimming pool below and everybody is in a state of shock. His co-contestants scream while Rohit Shetty himself is in a state of shock. Faisal Shaikh seems to have risked his life to perform this deadly stunt. Also Read – Bigg Boss 16: Sumbul Touqeer, Jannat Zubair or Munawar Faruqi? Makers FINALLY lock contestants, here’s when the BIG reveal will start [Exclusive]

Who will be the winner of Khatron Ke Khiladi 12?

Well, there is great anticipation around the winner of the latest season of the stunt based show. Some reports suggest that it is Rubina Dilaik who has won while there are some reports suggesting that it is Faisal Shaikh. But a recent video of Tushar Kalia has made fans believe that he is the winner of Khatron Ke Khiladi 12. Also Read – TOP TV Newsmakers of the week: Raju Srivastava passes away, Bigg Boss 16 creates buzz; Kundali Bhagya, Ghum Hai Kisikey Pyaar Meiin not going off-air and more

During the grand finale of the show, we will see team of movie Cirkus including Ranveer Singh would make an appearance.