Skip to content
HomeEntertainmentKhatron Ke Khiladi 12 winner: Not Rubina Dilaik, but THIS celeb wins the trophy? Check the prize money and viral video 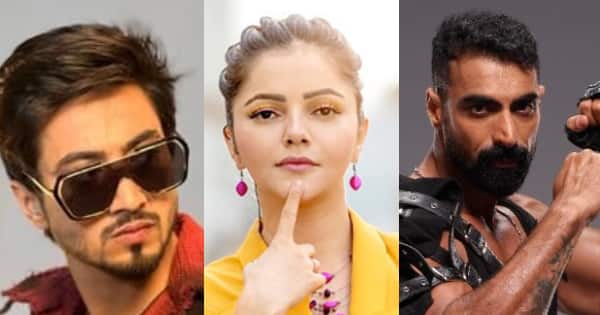 Khatron Ke Khiladi 12 has reached its climax. Rohit Shetty’s stunt-based show will get its winner soon. The top four contestants of the show are Tushar Kalia, Jannat Zubair, Rubina Dilaik and Faisal Shaikh. There are many reports doing the rounds of the internet suggesting that Tushar Kalia and Faisal Shaikh are the top two finalists. Some reports are also suggesting that Rubina Dilaik has won the show. BUT! A viral video has something else to say. A video of Tushar Kalia has got everyone talking. Also Read – Bigg Boss 16: Sumbul Touqeer, Jannat Zubair or Munawar Faruqi? Makers FINALLY lock contestants, here’s when the BIG reveal will start [Exclusive]

The video that has gone viral on social media, it shows Tushar Kalia stepping out of the shoot location and heading toward his van. A man can be seen holding a big car key cutout next to him. Well, assumptions are being made basis this that Tushar Kalia is won. Apart from the prize money, the winner is also given a car as a gift. Check out the screengrab from the video below: Also Read – TOP TV Newsmakers of the week: Raju Srivastava passes away, Bigg Boss 16 creates buzz; Kundali Bhagya, Ghum Hai Kisikey Pyaar Meiin not going off-air and more

Earlier, it was being assumed that Rubina Dilaik has won the show. A promo was shared by Colors TV that had the actress talking about ‘Jeet, Jeet and Jeet’. Also Read – Khatron Ke Khiladi 12: Ranveer Singh’s OOPS moment in front Rubina Dilaik will leave you in splits [Watch Video]

Check out Rubina Dilaik’s video below:

Talking about the prize money, Siasat.com has reported that the winner of Khatron Ke Khiladi 12 could win anything between Rs 20 to Rs 30 lakhs. Well, that’s quite a lot!

Khatron Ke Khiladi 12 grand finale is going to take place on September 25. The team of Rohit Shetty’s Cirkus would appeare on the last day to announce the winners. Ranveer Singh of course would be his energetic best. Rohit Shetty will also be seen on Jhalak Dikhhla Jaa 10.