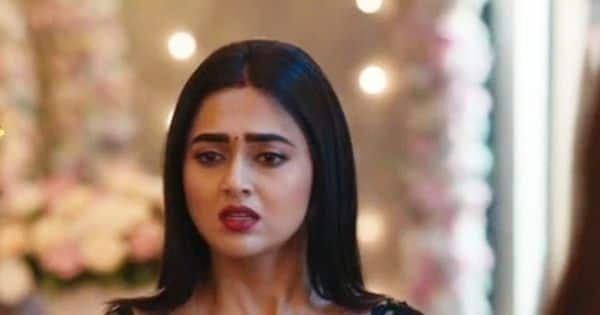 Rishabh (Simba Nagpal) brings his injured father Lalit home. Seema (Sudha Chandran) mocks him and asks him to keep his mouth shut otherwise it won’t take much time for her to kill Rishabh. The fear on Lalit’s face is evident. Meanwhile, Reynaksh (Zeeshan Khan) mocks Pratha (Tejasswi Prakash) that he will destroy her family. Later, he is seen getting scared of the mouse trap. He asks Anya to take it away. He then shape-shifts into a big mouse and eats up the plate. Anya wonders why Reynaksh is near the food kept for the mouse trap. He then quickly picks up a rose and tells her that he was looking it for her. Anya blushes and hugs him. Reynaksh flaunts a wicked smile on his face and is pretty confident that Pratha will never be able to expose his true identity. Also Read – Trending TV News Today: Tejasswi Prakash OPENS up about relationship with Karan Kundrra, Rubina Dilaik raises temperature in a bikini and more

At the roka ceremony of Anya and Reynaksh, Seema tells Lalit how she trapped him in her fake love, got married to him and that was the time she had decided what kind of work she needs to get done from him. Pratha then asks for everyone’s attention as she wishes to surprise Seema. As Pratha plays a slideshow on the projector, a picture of Lalit and Chanda aunty surfaces and leaves Rishabh agitated. Also Read – Tejasswi Prakash says her relationship with Karan Kundrra is ‘not normal’, ‘Every little move they are watching’

Rishabh questions his dad and mom about Lalit’s relationship with Chanda aunty. When no one answers, Rishabh goes to Chanda aunty and asks her the truth about their picture. She tells him that she is Lalit’s wife. Rishabh is in shock. Seema tries to convince Rishabh that Chanda aunty has lost her memory, because of which she can’t even remember her own son. Also Read – Cannes 2022: Hina Khan is all smiles as she departs for the French Riviera [VIEW PICS]

As the truth comes to the fore, Reynaksh and Anya’s engagement gets called off. Reynaksh warns Pratha that though she has managed to bring out the truth, he will teach her a lesson soon. As Reynaksh snaps at Pratha and drops her on the floor, Rishabh grabs him by his collar and starts punching him. The rest of the family members managed to separate them.

Reynaksh then grabs Chanda by her neck after she remembers that she is Rishabh’s mother. He tries to escape in the car but Mehek stops him. Reynaksh tries to attack Mehek but gets smashed instead by Pratha. A brutal fight follows as Pratha and Reynaksh shape-shift into Shesh Naagin and Nevla. Reynaksh manages to dodge the Naagin sisters and flees from the spot with Chanda aunty.

Meanwhile, Seema calls Reynaksh and asks him to handover the phone to her real mother-in-law Chanda. Pratha tells Chanda not to tell Reynaksh the whereabouts of the Amrit Kalash. But Pratha doesn’t know that Chanda has already given away all the information. Pratha feels helpless and defeated.