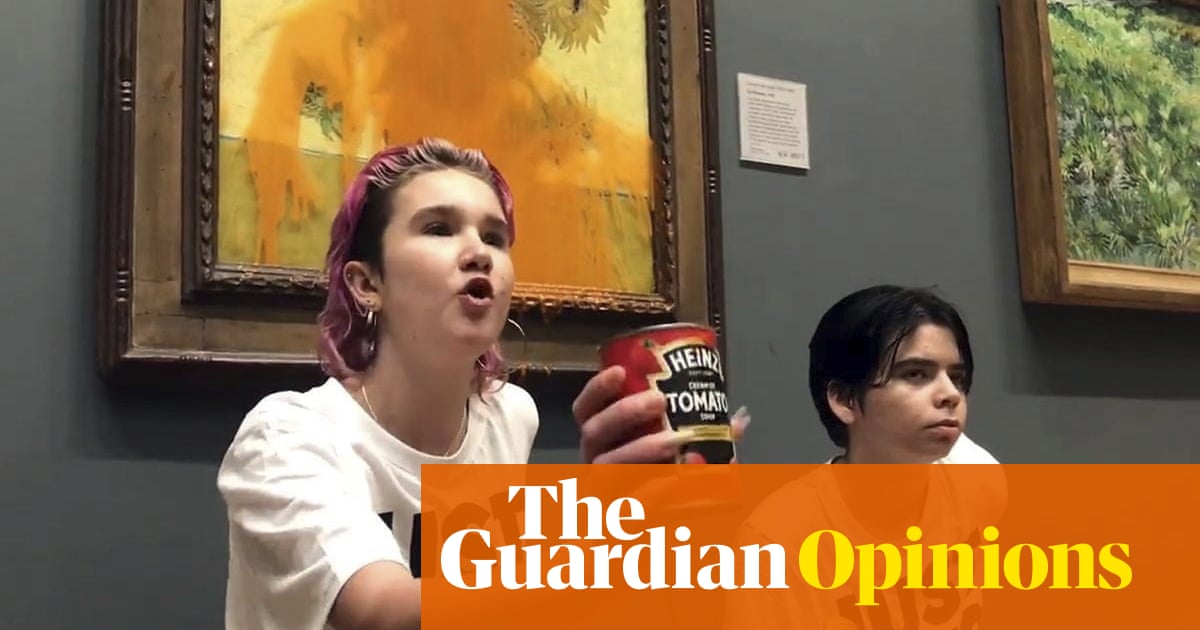 If you’re going to make a political statement by attacking an artwork then pick a big one. In the absence of the Mona Lisa, Just Stop Oil protesters today threw soup over one of the 19th century’s most recognisable images – immortalised on biscuit tins and tea towels the world over – Van Gogh’s Sunflowers. The National Gallery attack is the latest in a campaign that saw them glueing themselves to a reproduction of Leonardo da Vinci’s painting The Last Supper in the Royal Academy in July.

Such assaults are now so common that the Mona Lisa – most recently pelted with cake at the Louvre in Paris back in May – now smiles on from behind a pane of bullet-proof glass. The sunflowers themselves are unlikely to have suffered any damage, beyond the indignity of being eclipsed by a brighter shade of orange. The protesters will have known this, and there is a certain situationist wit in their choice of weapon – not a spray can but a tin of tomato soup, as immortalised by Andy Warhol, in the pop artist’s critique of exactly the sort of industrialisation that Just Stop Oil sees as responsible for the destruction of the planet.

But cliche is not a good look for activists intent on landing an urgent message, and I’m sure I’m not alone in thinking, on hearing the news, not “how shocking”, but “here we go again”. Theatre it may be, but it all looks a bit predictable, a little tame. “What is worth more, art or life?” asked one of the protesters. Well, since you ask, it’s complicated. Art is not really their target, anyway, but the fetishisation of it, and in this context, it could be argued that they chose their target well: you only have to look at the Van Gogh Experience – content-free, immersive light shows that have been proliferating around the world – to realise that the Flemish artist himself has become a commodity, the subject of relentless capitalist exploitation.

However, this is not the targeted explosion of rage that caused an earlier attack in the National Gallery in 1914, when suffragette Mary Richardson slashed Velázquez’s The Rokeby Venus with a knife in protest against the treatment in prison of Emmeline Pankhurst. Neither is it the galvanising action, bubbling up from a communal sense of anger and communally enacted, that toppled a statue of slave trader Sir Edward Colston headfirst into Bristol docks. Sir Edward will never be the same again – nor will our attitude to the unacceptable colonial history he represents. The tomato soup, on the other hand, will be cleaned up and normal service will resume forthwith at the National Gallery. Bags may just be a little more carefully searched at the entrance.