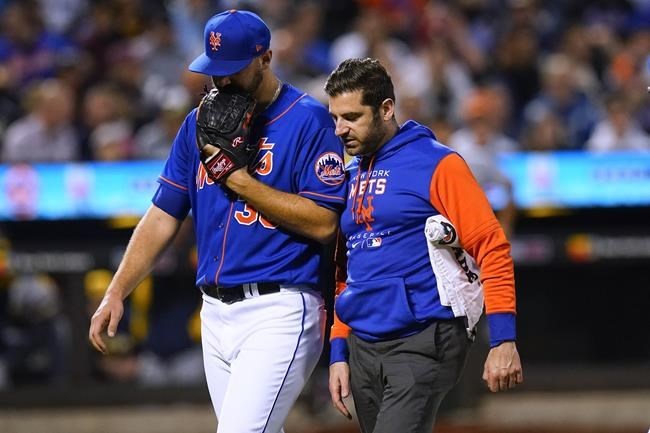 NEW YORK (AP) — New York Mets pitcher Tylor Megill will be out until at least mid-August after the team moved him to the 60-day injured list Monday.

The 26-year-old right-hander was put on the 15-day IL on June 17 because of a strained right shoulder, joining aces Jacob deGrom and Max Scherzer. The Mets said at the time Megill would not throw for four weeks.

Earlier in the season, Megill missed four weeks with right biceps tendinitis and returned June 10. He is 4-2 with a 5.01 ERA in nine starts this year.

New York made the 40-man roster move to open a spot for infielder Kramer Robertson, who was claimed off waivers from Atlanta and optioned to Triple-A Syracuse. New York also activated right-hander Colin Holderman from the injured list and optioned him to Syracuse.

Robertson, 27, made his major league debut with St. Louis on May 10 and was 0 for 1 in two games. He was claimed by Atlanta off waivers on June 5. He has hit .242 with six homers, 23 RBIs and 16 steals this season for Triple-A Memphis and Gwinnett of the International League.