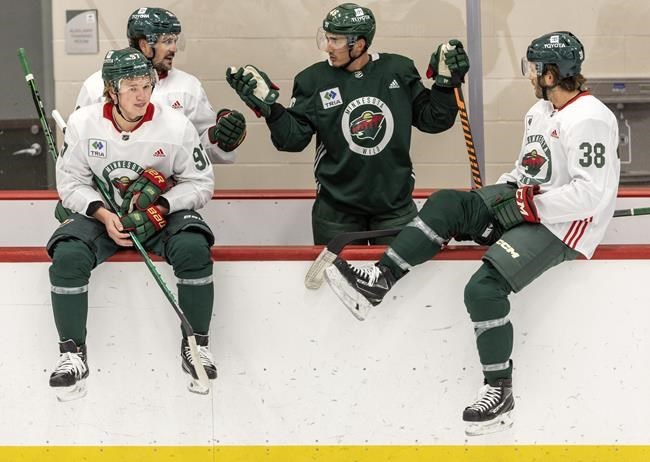 ST. PAUL, Minn. (AP) — Last summer, a long contract negotiation between Kirill Kaprizov and the Minnesota Wild — plus the complication of international travel and COVID-19 protocols — put the star left wing’s arrival for the start of training camp in question.

That process turned out to be a snap compared to this year.

Kaprizov’s return to his native Russia after the Wild were ousted from the playoffs last spring led to a stressful offseason for the entire organization, as the franchise player ran into several roadblocks in his attempt to travel back to the U.S.

The war in Ukraine and American-Russian political relations have made a trip home to visit family and friends not so simple anymore.

“At least I could do something last year, or not do something,” said general manager Bill Guerin, who gave Kaprizov a five-year, $45 million contract prior to last season. “At least we knew where he was and he was safe, and all that stuff. It was just a simple contract negotiation. This was a lot more serious, and when you can’t help it’s a little different.”

The Wild did help as much as they could, with assistant general manager Chris O’Hearn and Kaprizov’s agent, Paul Theofanous, spearheading the behind-the-scenes paperwork.

While rumors about the status of Kaprizov’s military exemption spun through Russian media, the gist of the issue, according to Guerin, was the expiration of Kaprizov’s work visa. Pandemic-related backlogs have made appointments at foreign consulates much harder to obtain.

“I’m sure it wasn’t a great part of his life, but it was more difficult than we thought it was going to be,” said Guerin, who alluded to help from “special friends” in Washington. “Kirill was really patient. He did exactly what he had to do. It was just a really tough time for him. We’re just glad that he’s here. We’re glad that he’s safe and healthy and ready to go, and he’s excited. That’s behind us.”

After taking the ice for the team’s first practice on Thursday, Kaprizov met with reporters but politely declined to answer questions about his off-the-ice ordeal out of preference to focus on hockey.

The hockey part? Yeah, that ought to be a lot smoother.

He had seven goals and one assist in Minnesota’s six-game loss to St. Louis in the first round of the playoffs last spring after 47 goals and 61 assists in 81 games during the regular season. The Wild had Kaprizov’s translator on the phone while he stood at a podium at the rink, but the easy-smiling, soft-spoken 25-year-old only needed his service for about half of the time. Kaprizov was comfortable enough to speak in English for the rest of it.

“I do what I do every summer. I don’t think about 100 points. I just practice,” Kaprizov said when asked how he can top his 2021-22 season. “Have fun a little bit sometimes.”

Maybe not as much as in summers past.

Since the war ramped up in February, Russian NHL players have found themselves in quite a predicament, trying to lay as low as possible on these geopolitical issues.

Philadelphia Flyers goalie prospect Ivan Fedotov was sent to a remote military base in his homeland this summer. Just this week, the Czech Foreign Ministry told the Nashville Predators and San Jose Sharks that Russian players would not be welcome because of the war in Ukraine when the two teams play in Prague on Oct. 7-8.

For now, the Wild are more than thrilled to have “Kirill The Thrill” with them in Minnesota.

“Obviously, you’re always thinking about your family and things like that. He’s not the only person to go through a tough time or a tough situation. That happens every single day of every year on every team. It’s not an easy life. Players always have a lot on their minds,” Guerin said. “The great thing about the game is when you come to the rink, it’s kind of like your safe haven and you can get away from all that and just be a hockey player and focus on the game.”