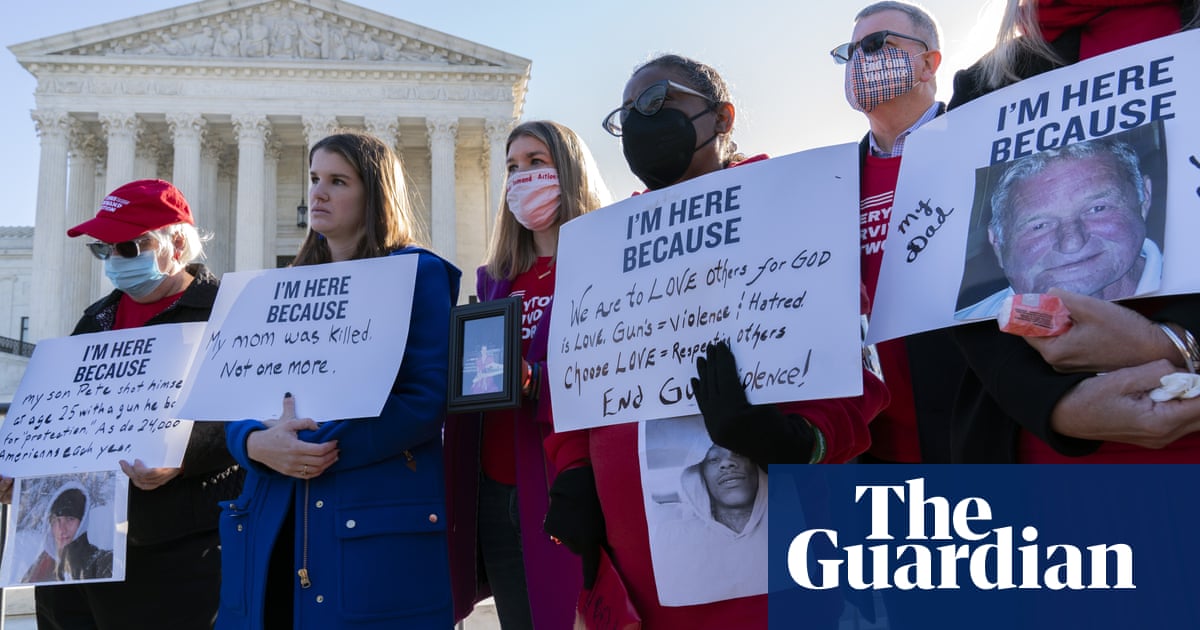 The US supreme court has opened the door for almost all law-abiding Americans to carry concealed and loaded handguns in public, after the conservative majority struck down a New York law that placed strict restrictions on firearms outside the home.

The governor of New York, a Democrat, said the ruling was “not just reckless, it’s reprehensible”. Pointing to recent mass shootings in New York and Texas, a leading progressive group called the ruling “shameful and outrageous”.

On the US left, outrage is growing over the court’s rightward march. Earlier this week, the court handed down a ruling which attacked the separation of church and state. As soon as Friday, it is expected to undermine or remove the right to abortion, guaranteed since 1973, and to reduce the federal government’s ability to cut emissions contributing to the climate crisis.

The New York law struck down on Thursday required anyone wanting to carry a handgun in public to prove that they had a “proper cause” to do so.

It has profound implications for the safety and conduct of up to 83 million people in New York and seven other states plus Washington DC which have similar “proper cause” laws. They include heavily populated states, such as California and New Jersey, which account for roughly three out of every four Americans.

Just weeks ago, an 18-year-old carrying a legally bought assault-style rifle shot and killed 10 people in a racist attack on a supermarket in a majority Black neighborhood in Buffalo, New York.

Ten days later, another 18-year-old broke into an elementary school in Uvalde, Texas, and killed 19 children and two adults before being shot dead by law enforcement.

Democratic and Republican senators have since agreed a framework for gun reform. On Thursday Mitch McConnell, the Republican leader in the Senate, said the proposals did not “lay one finger on the second amendment” and would make the country safer. But any gun legislation inevitably faces strong headwinds, with the potential to blow all the way to the conservative-packed court.

Rahna Epting, executive director of the progressive group MoveOn, said the New York ruling would “only fuel the epidemic of gun violence in this country. It is a shameful and outrageous decision which will lead to more deaths and more violence.

“The conservative-packed supreme court, in concert with Republicans in Congress, is ensuring our schools, our grocery stores, and our churches will continue to be targets of violence and not the sanctuaries and safe places they should be.”

The court has steadily undermined gun laws. In 2008 it recognised a right to keep guns at home for self-defense. It extended that right 2010.

The New York case was brought to the court after two men sued the state. Under the “proper cause” law, the men could secure unlimited permission to carry concealed guns in public only if they could demonstrate a special need for self-protection.

Lawyers argued that carrying a firearm outside the home was a “fundamental constitutional right. It is not some extraordinary action that requires an extraordinary demonstration of need.”

Before the decision came down, several of the largest US civil rights and gun safety groups attempted to dissuade the court from gutting New York regulations.

The American Civil Liberties Union (ACLU) filed an amicus brief in which it argued that lifting controls on carrying guns in public places would harm basic first amendment rights such as assembly, association and speech.

Gun control advocates warned that scrapping the law could exacerbate relations between police officers and citizens because anyone coming into contact with law enforcement is now more likely to be legally armed.

On Thursday the governor of New York, Kathy Hochul, said: “The supreme court is setting us backwards in dealing with gun violence … This decision is not just reckless, it’s reprehensible.” Hochul also said she was “prepared to call the legislature back into session to deal with this”.

Brian Frosh, the attorney general of Maryland, said the ruling would cause “more deaths and more pain in a country already awash in gun violence”.

“If the norm is that people can carry firearms, our neighbourhoods, our streets and other public places will become more dangerous. It will make the lives of law enforcement more difficult and more perilous. The epidemic of gun violence sweeping our nation demonstrates daily the folly of introducing more guns into this boiling cauldron.”

Epting said: “It is hard to imagine a supreme court that is more out of touch with the people of this nation. Commonsense policies to reduce gun violence are supported by nine out of 10 Americans. This court has once again shown its true colours. It is now nothing more than the political arm of the most extreme elements of the Republican party.”

Pointing to McConnell’s unprecedented denial of even a hearing to Barack Obama’s third nominee – Merrick Garland, now attorney general – and the confirmation of three justices under Donald Trump, Epting said Republicans “stole seats and packed this court to enact what voters have repeatedly rejected at the ballot box.

“It is far past time we expand the court, reform it, and restore balance to our judicial system.”