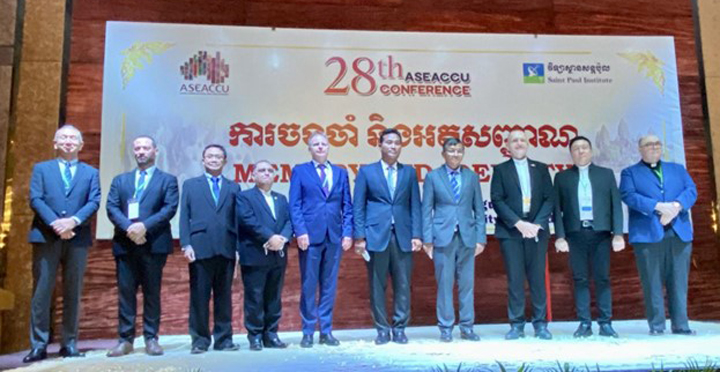 A PROMISING group of Catholic educational institutions in Asia is restarting its international cooperation after a three-year hiatus due to the pandemic.

Led by the University of Santo Tomas (UST) in the executive board, the Association of Southeast and East Asian Catholic Colleges and Universities (ASEACCU) held its 28th conference with the theme: “Memory and Identity.” The event ran from August 23 to 27 in Phnom Penh, Cambodia.

“I have always believed that we have to work as one team in different specialties: collaborating together, exchanging knowledge and experiences, ASEACCU members working together as a Catholic identity in higher education,” said Bishop Olivier Schmitthaeusler of Phnom Penh.

“We can move forward more quickly and effectively in solidarity if we are able to promote higher education both in the Catholic Church and in society where we work,” he added.

Bishop Schmitthaeusler is the founder and chancellor of the St. Paul Institute in Cambodia, which hosted the international conference.

Meanwhile, UST Rector Very Rev. Fr. Richard Ang OP, PhD, who is also ASEACCU’s executive secretary, highlighted in his welcome remarks that the event theme was inspired by the last book of St. John Paul II: “The pontiff’s reflections on the most challenging issues and events of his period revealed his intellectual and spiritual journey and pastoral experience.”

Father Ang continued: “Right now our nations face a common enemy: the pandemic. We are weighed down by its protracted effects, but buoyed up by the firm belief that God will never abandon us in the difficult moments of our lives.”

IFCU, which has since been supporting ASEACCU, is a federation recognized by the Holy See via a decree in 1948, and personally by Pope Pius XII in 1949. It closely collaborates with the Congregation for Catholic Education and various dicasteries of the Church, including that for Integral Human Development.

Catholic universities and colleges from Australia, Cambodia, Indonesia, Japan, South Korea, China, the Philippines, and Thailand were represented in the meeting.