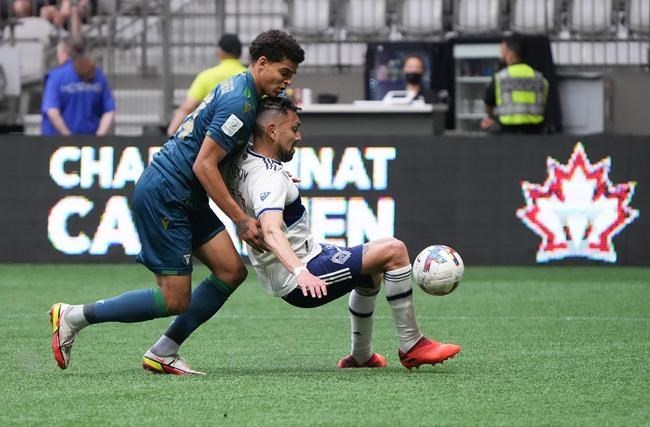 VANCOUVER — The Vancouver Whitecaps punched their ticket to the Canadian Championship final Wednesday with a 2-1 victory over York United.

Striker Brian White scored twice for the home side, with attacking midfielder Ryan Gauld assisting on the second tally of the night.

United’s Isaiah Johnston amped up the tension late in the game with a goal in the 84th minute.

The Caps will host fellow Major League Soccer side Toronto FC in the final in late July after Toronto routed Club de Foot Montreal 4-0 in the earlier semifinal on Wednesday. It will be Vancouver’s first appearance in the tournament’s decisive game since 2018.

United was the last Canadian Premier League team left in this year’s competition.

The winner of the Canadian Championship will hoist the Voyageurs Cup and represent Canada in the 2023 CONCACAF Champions League.

White’s second-half brace gave the Whitecaps a comfortable lead late but the visitors refused to go down quietly.

United substitute Mouhamadou Kane dished a ball to Johnston in the 84th minute and the midfielder dribbled deep into the penalty area, sidestepping Vancouver defender Jake Nerwinski and putting a low shot past Cropper to get York back in the game.

The Caps took a 2-0 lead in the 74th minute with a familiar face putting a shot past Giantsopoulos.

Gauld sent a solid cross in and White tapped in a left-footed shot from the centre of the box for his second goal of the game.

York nearly evened the score in the 61st minute off a free kick. Diyaeddine Abzi put a shot around the wall and forced Cropper to make a diving save.

Vancouver finally snapped the scoreless deadlock in the 53rd minute when midfielder Ryan Raposo fired a shot from just outside the six-yard box. Giantsopoulos punched the ball out of the air but White picked up the rebound and quickly punted it into the back of the United net, giving the home side a 1-0 cushion.

The strike was White’s first goal in Canadian Championship play and his third of the year for the Caps.

The Whitecaps dominated the first half, controlling 60.9 per cent of the possession and outshooting the visitors 13-2 total and 4-1 in on-target shots.

White nearly put the Caps on the board in the 25th minute, converting a cross from Gauld into a header that skimmed over the crossbar.

Four minutes later, Vancouver’s Lucas Cavallini streaked into York territory and blasted a shot from just outside the six-yard box, only to see Giantsopoulos get a leg on it for a stop.

United countered with four corners in quick succession near the end of the half but couldn’t capitalize on its chances.

Both clubs will be back on the field Sunday, with York hosting Valour FC in CPL play and the Whitecaps entertaining the New England Revolution in MLS action.

FOOTNOTES: Giantsopoulos was briefly a member of the Whitecaps earlier this season. He acted as an emergency backup goalkeeper in Vancouver’s MLS game against Charlotte FC on May 22. … An announced crowd of 10,503 took in the game at B.C. Place.