A coalition loyalist announced Thursday that he would attempt to fast-track key pieces of legislation calling for snap elections and keeping opposition leader Benjamin Netanyahu from retaking power, moving the bills into the Knesset committee he heads and sidestepping a renegade lawmaker despite the Knesset’s legal adviser raising doubts over the legality of the maneuver.

Labor MK Gilad Kariv moved to mark up the bills in his Constitution Committee, rather than the House Committee led by Yamina MK Nir Orbach, who has indicated he may hold the legislation back to give the opposition a chance to form its own government in the current Knesset, without sending Israelis to the polls.

“The Israeli public cannot be held hostage for political ploys. Once the Knesset has voted by a near-unanimous majority to move up elections, the process needs to be completed quickly and efficiently,” Kariv said.

The pair of bills consist of one to dissolve the Knesset, calling new elections, and another that would bar someone charged with a serious crime from serving as prime minister, essentially blocking Netanyahu’s path back to power. They will be discussed in the Constitution Committee Sunday morning, Kariv said.

Orbach, one of the coalition’s most right-wing members, effectively cut ties with the ruling bloc last week, robbing it of a majority in the Knesset and ultimately leading to Prime Minister Naftali Bennett’s decision to set in motion the process to dissolve the Knesset for new elections and prepare to hand over his post to Foreign Minister Yair Lapid.

In announcing he was quitting the coalition, Orbach said he preferred for the government to be replaced by an alternative coalition, which can be done if at least 61 lawmakers support a different cabinet slate. Such a move would void the need for another round of elections, Israel’s fifth in under four years.

However, a new coalition would be highly improbable given that Netanyahu is still opposed by a majority of lawmakers in the Knesset, including due to the fact that he is facing criminal charges in three graft cases.

Orbach’s House Committee, which oversees legislative procedures and rules, would normally be the destination for a bill to call new elections, but Kariv said there was concern that the Yamina MK would instead stall the process in order to allow more time for an alternative coalition to be formed.

The current coalition’s leaders are also hoping to pass the legislation to disperse the Knesset as soon as possible because a crucial law extending Israeli legal parameters to West Bank settlers expires at the end of June.

If the Knesset is dissolved before then, the law will automatically be extended for several more months. If it is not, Israel will descend into an unprecedented state of legal chaos, according to Justice Minister Gideon Sa’ar. While much of the opposition is backed by settlers and their supporters, it has blocked the passage of the law in an attempt to bring down the coalition.

On Monday, Bennett announced the end of the road for his fractious coalition after a year in power, saying the move was partly an attempt to save the settler law. The Knesset on Wednesday approved a bill dissolving the Knesset on its initial reading, but the measure must still go through committee stages and three more readings in the full plenum before the Knesset is closed and new elections called.

Kariv said his committee would also discuss an amendment that would bar Netanyahu from serving as premier due to his legal issues, ahead of preliminary reading in the Knesset. The gambit, a top goal of some legislators since they formed the Bennett-led government last June, is thought to face slim chances of passage given the short timeframe before the Knesset dissolves. It is also not clear if a majority of Knesset members would back the move. 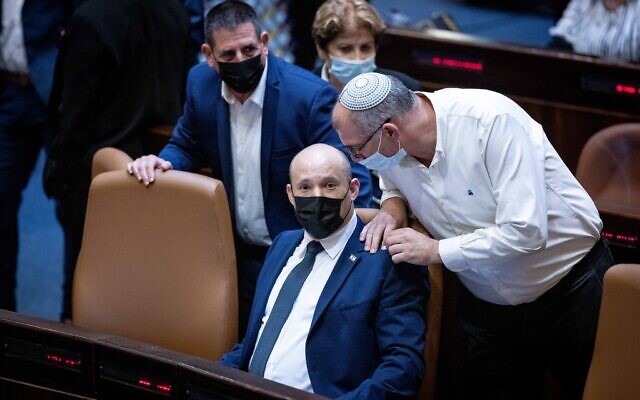 The Kan public broadcaster reported Thursday that the Knesset’s legal adviser has raised qualms with fast-tracking such sensitive legislation, though it was not clear whether she would actually block the move.

In a statement, the Knesset’s legal adviser said it was doubtful Kariv’s committee had the authority to move the legislation out of Orbach’s auspices, so long as Orbach does not drag his feet.

However, a statement from Kariv’s office said the Knesset legal adviser had approved the bills changing hands.

Kariv’s announcement was lambasted by the opposition, with Likud lawmakers drawing comparisons to North Korea.

The move also led to a blow-up of talks between the sides on legislation on which they would agree to cooperate before disbanding the Knesset.

Kariv defended the move, insisting there were no legal issues with it and that his announcement was made in order to hold the opposition and Orbach’s feet to the fire and ensure that they move forward with the Knesset dispersal legislation in a swift and appropriate fashion.