AFP — Ways to halt the war in Ukraine and the possible launch of a new conflict in Syria were expected to dominate talks on Friday between Russian President Vladimir Putin and Turkish counterpart Recep Tayyip Erdogan.

The Turkish leader was riding high from the diplomatic success of helping orchestrate the resumption of Ukrainian grain shipments across the Black Sea when he took most of his top ministers to Sochi for his second talks with Putin in 17 days.

But there are tensions. Putin told Erdogan in Tehran last month that Russia remains opposed to any new offensive that Turkey might be planning against Kurdish militants in northern Syria.

Analysts believe these strains form part of the “competitive cooperation” that has defined the two leaders’ relationship over the past 20 years.

The two were expected to hold private talks and a working lunch but no joint press conference.

“Russia’s war on Ukraine has restored Turkey’s self-image as a key geopolitical player and given Erdogan more visibility than at any time in the last few years,” European Council on Foreign Relations fellow Asli Aydintasbas wrote in a report last week. 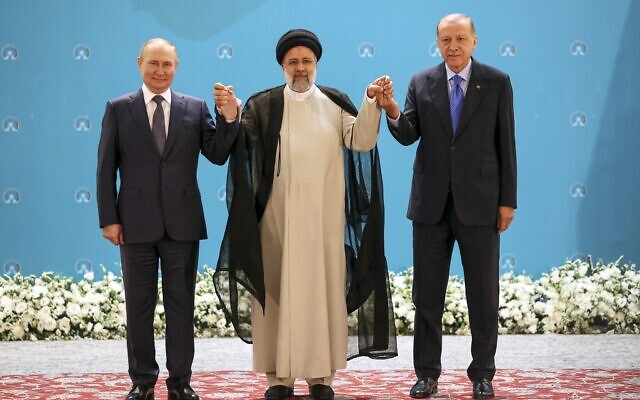 Attempts by NATO member Turkey to remain neutral in the face of Moscow’s historic stand-off with the West over Ukraine are starting to pay off.

The first ship from Ukraine crossed Istanbul on Wednesday. Three more ships destined for Turkey and markets in Ireland and Britain set sail on Friday under a landmark deal designed to relieve a global food crisis caused by the war.

Turkey wants to translate this success into truce talks in Istanbul between Putin and Ukrainian President Volodymyr Zelensky.

“We discussed if the grain agreement could be an occasion for a sustainable ceasefire,” Turkish Foreign Minister Mevlut Cavusoglu said after talks with Russian counterpart Sergei Lavrov in Asia this week.

Complicating these efforts are repeated threats by Erdogan to launch a new military operation in Syria — a country where Russian and Turkish interests clash. 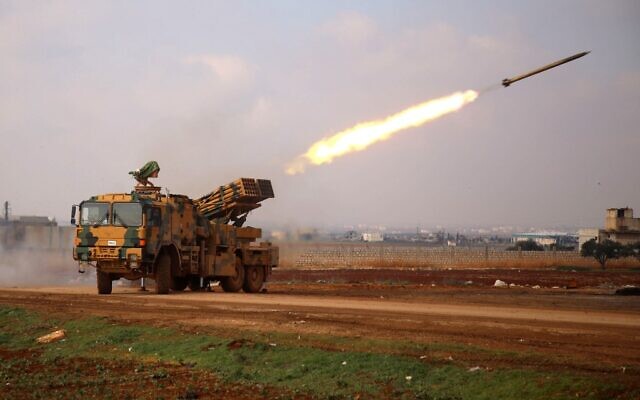 A Turkish mobile rocket launcher fires from a position near the village of Miznaz, on the western outskirts of Syria’s Aleppo province, on February 14, 2020. (Aaref Watad/AFP)

But Erdogan is threatening to invade northern Syria to expand an existing buffer zone that pushes out Kurdish groups he links to “terrorists” waging an insurgency against the Turkish state.

Putin told Russian media in Tehran he still has “certain disagreements, obviously” with Erdogan about Syria.

“In most likelihood, [Friday’s] meeting has something to do with a possible incursion into Syria, for which Turkey did not get a green light,” said foreign affairs analyst Soli Ozel of Istanbul’s Kadir Has University.

“Russia would have to get something in return,” Ozel added.

Some analysts speculate that what Putin really wants is drones and ways to escape Western sanctions linked to the five-month-old war.

Turkey has been supplying Kyiv with lethal Bayraktar aerial vehicles that have proved effective in destroying Russian armored columns across the Ukrainian war zone. 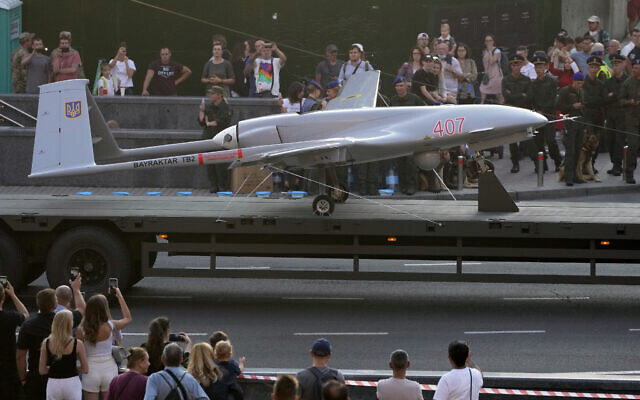 A Turkish-made Bayraktar TB2 drone is displayed during a rehearsal of a military parade dedicated to Independence Day in Kyiv, Ukraine, Aug. 20, 2021. (/Efrem Lukatsky/AP)

US officials say a Russian team has visited Iran to scope out the purchase of hundreds of drones for its own forces in Ukraine.

Erdogan has added to the intrigue by telling his cabinet that Putin asked him in Tehran to start selling the Bayraktars to Russia.

A senior Turkish official later said that Erdogan interpreted the suggestion as a joke.

But Kremlin spokesman Dmitry Peskov appeared to lend credence to the idea.

Western officials cited by the paper could not confirm if the alleged Ukrainian intercept was real. Turkey is under heavy US pressure to comply with the sanctions in full. 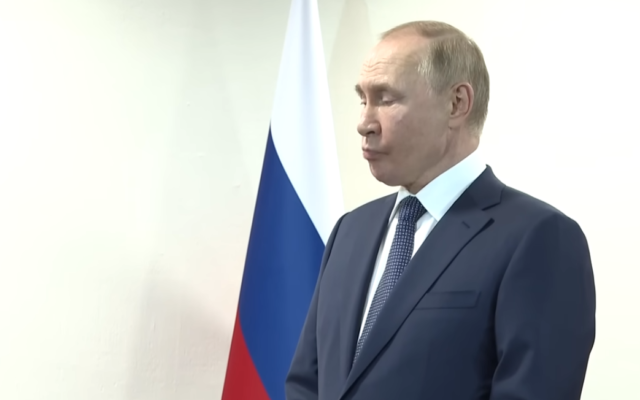 Russia’s President Vladamir Putin is made to wait by his Turkish counterpart President Recep Tayyip Erdogan before a one-on-one meeting in Tehran, July 19, 2022. (Screengrab/YouTube)

One unlikely source of friction is how the two leaders — renowned for being chronically late — will actually meet.

Erdogan made Putin stand in place for nearly 50 seconds before walking out to greet him in Tehran.

Many interpreted this as payback for the time Putin made Erdogan wait for nearly two minutes at a meeting in 2020.