The Hamas terror group on Thursday threatened violence “repercussions” over Jewish visits to Jerusalem’s super-sensitive Temple Mount, in a warning issued days before the start of the Jewish High Holidays when visitor numbers increase.

The holy site in the Old City of Jerusalem has been the focus of tensions for years, but Palestinians have voiced increasing anger at the rising number of visits by Jews, who revere the compound as their holiest site.

Mahmoud al-Zahar, a senior member of the Gaza-ruling Hamas, warned, “The continuation of the Zionist aggression and their brutality against Jerusalem and the holy shrines will be the cause of a major battle.”

Speaking in a rare press conference in Gaza’s Omari mosque, al-Zahar alluded to Palestinian concerns that a longstanding convention by which Jews may visit but not pray in the compound was being covertly flouted.

Decrying what he called a “blatant attack on the religious and Islamic status of the city and the mosque,” al-Zahar said Israel bore full responsibility for “the possibility of dragging the entire region into an open religious war.”

He also said the Islamist terror group “defends the rights and sanctities of our people by all possible means.” 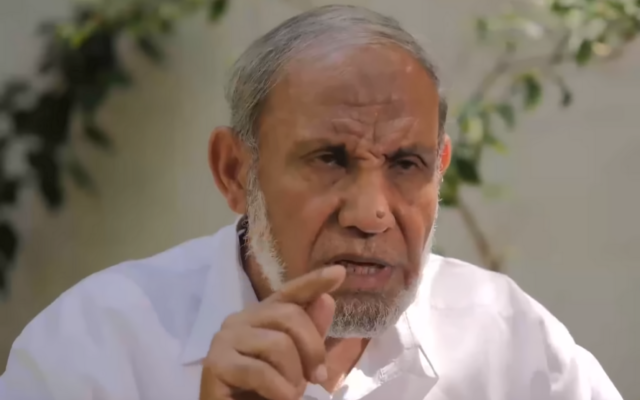 Hamas co-founder Mahmoud al-Zahar speaks to Britain’s Sky News from his home in the Gaza Strip, on May 24, 2021. (Screenshot: Sky News/ Youtube)

Beyadenu, a group that encourages Jews to visit the Temple Mount, said it was committed to increasing such visits.

“We broke the 50,000 visitor barrier on the Temple Mount” this past year, Beyadenu said ahead of the Jewish New Year, Rosh Hashanah.

Tom Nissani, the group’s chief executive said: “The goal is 100,000 visitors next (Jewish) year,” which begins on Sunday night.

Israeli far-right lawmaker Itamar Ben-Gvir, tweeted Thursday that he “went up to the Temple Mount this morning to pray and exercise sovereignty in the holiest place for the people of Israel.”

Thousands of Jews — Israelis and tourists — are expected to visit Jerusalem’s Old City during the High Holiday period, which runs into mid-October.

Israel captured the Old City, along with rest of East Jerusalem, from Jordan in the Six Day War of 1967.

The Temple Mount is the holiest site in Judaism and is revered as the location of both ancient Jewish temples. The compound, which houses the Al-Aqsa Mosque, is Islam’s third holiest site and is managed by Jordan, as part of a delicate arrangement with Israel.

Hamas, which has ruled over the Gaza Strip since 2007, regularly describes itself as the primary force defending Al-Aqsa against Israel.