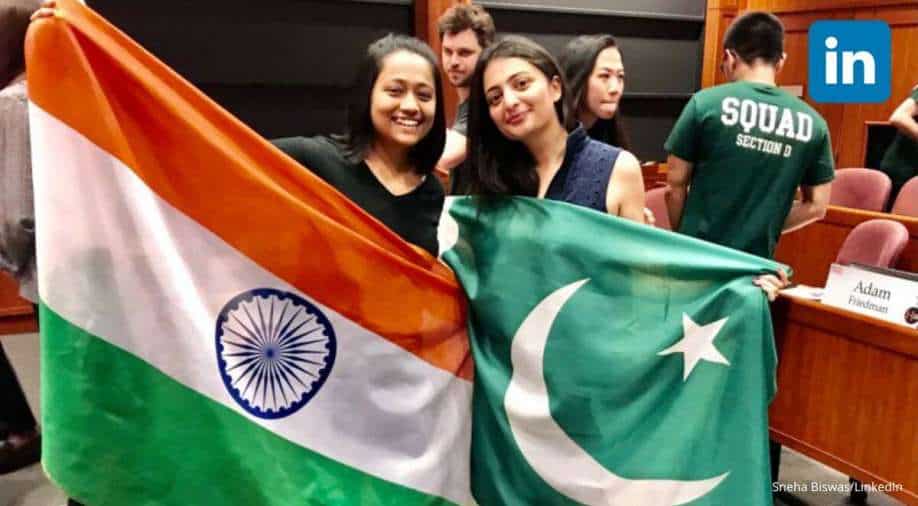 An Indian woman’s post on her friendship with a Pakistani classmate has garnered appreciation on social media.

A photograph posted by her on LinkedIn depicts the two Harvard Business School students holding the flags of their respective nations.

According to Sneha Biswas’ essay, her connection with a Pakistani student challenged her preconceived notions of the neighbouring nation.

For many years, the two countries have had unfriendly relations.

Pakistani musicians and cricket players are not permitted to perform or compete in India while Bollywood movies are not allowed in Pakistan.

Celebrating the fervour of unity depicted in the post, one user commented, “We built walls between us and thus it’s up to us to bring it down.” Another user hoped that the two women would “share a lifelong friendship that may bring changes across the borders for girls on both sides”.

Ms. Biswas, a businesswoman herself, posted on LinkedIn about her bond with her Pakistani classmate. She didn’t say who her pal was.

She claimed in the post that because she was raised in a tiny town, she knew little about Pakistan and its inhabitants. She only learned things from literature and the media, which frequently promoted themes of hostility and competition.

On her first day at Harvard, she made her Pakistani buddy, with whom she has maintained a strong bond ever since.

She discovered over the course of numerous conversations over tea and biryani (a flavorful rice dish) that her friend shared a past with her that included growing up in a “conservative Pakistani environment” but with a supportive family.

“I realised that while pride for your individual nations stand strong, your love for people transcends geographies and boundaries,” wrote Ms Biswas.

In her post, she promoted intercultural harmony by stating that “humans create boundaries, borders, and gaps.” She spoke of “shattering boundaries” for young Indian and Pakistani girls who are “scared to shoot for the stars,” as well as between the two nations.

In the week leading up to India’s and Pakistan’s independence anniversaries, which are observed on August 15 and 14, respectively, the message has gained attention on social media. The Partition in 1947, which resulted in the split of India into India and Pakistan, is also related to the independence of both countries. One of the bloodiest historical occurrences, the division is credited with sowing the seeds of hostility between the two countries.