The official death toll has more than doubled to 35 in a crackdown by Iran’s security forces on more than a week of protests that erupted after the death of a young woman in custody.

Angry demonstrators have taken to the streets of major cities across Iran, including the capital Tehran, for eight straight nights since the death of 22-year-old Mahsa Amini.

The Kurdish woman was pronounced dead after spending three days in a coma following her arrest by Iran’s feared morality police for wearing the hijab headscarf in an “improper” way.

“The number of people who died in recent riots in the country has risen to 35,” state media said, raising the official toll from at least 17 dead, including five security personnel.

However, according to the Oslo-based Iran Human Rights, at least 50 people have been killed by security forces in the anti-government protests.

Protests were held around the Islamic Republic on Friday, with online videos showing some turning violent in Tehran and other major cities including Tabriz.

The protests in Iran continue, this is from Tehran tonight.
“Hey hey ho ho Mollas got to go” [approximate translation] #IranProtests2022 pic.twitter.com/sKGRnVqql5

In some of the footage, security forces could be seen firing what appeared to be live ammunition at unarmed demonstrators in the northwestern cities of Piranshahr, Mahabad and Urmia.

In one video shared by Iran Human Rights, a uniformed member of the security forces is seen shooting an AK-47 assault rifle at protesters in Tehran’s Ferdowsi Boulevard.

It said other footage showed a “stream of state security forces… on a Tehran highway” on Friday night.

Security forces have carried out a wave of arrests of activists and journalists, including Niloufar Hamedi of the reformist newspaper Shargh, who reported on Amini’s death.

Images showed protesters walking freely with their hands aloft in triumph, but Hengaw acknowledged this could be “temporary” and expressed fears of a new crackdown there.

The London-based human rights group said that evidence it gathered from 20 cities across Iran pointed to “a harrowing pattern of Iranian security forces deliberately and unlawfully firing live ammunition at protesters.”

In its statement, Amnesty said security forces had shot dead at least 19 people on Wednesday night alone, including at least three children.

Thousands of people marched through Tehran during a pro-hijab rally Friday, paying tribute to security forces who have moved to quell a week of protests by what media called “conspirators.”

Demonstrations in support of the security forces also took place in several cities across the country including Ahvaz, Isfahan, Qom and Tabriz. 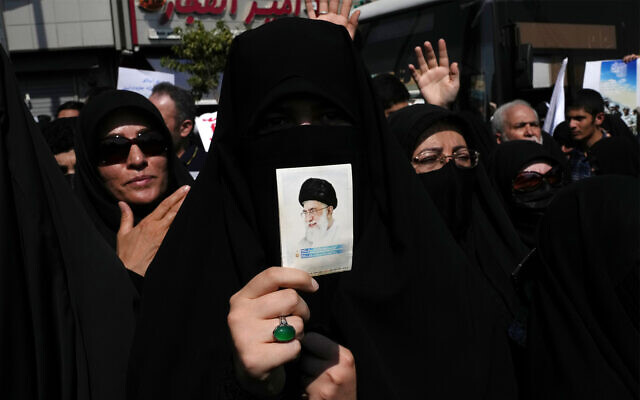 A pro-government demonstrator holds a picture of the Iranian Supreme Leader Ayatollah Ali Khamenei at a rally after Friday prayers to condemn recent anti-government protests over the death of a young woman in police custody, in Tehran, Iran, September 23, 2022. (AP Photo/Vahid Salemi)

Activists said she suffered a blow to the head in custody but this has not been confirmed by the Iranian authorities, who have opened an investigation.

Iranian women have burnt their headscarves and symbolically cut their hair in protest at the strict dress code, echoed in solidarity demonstrations from New York to Istanbul and Brussels to Santiago, Chile.

“Reports from oversight bodies were received, witnesses were interviewed, videos were reviewed, forensic opinions were obtained and it was found that there had been no beating,” Vahidi said.

The minister said Iran was investigating the cause of Amini’s death, adding “we must wait for the final opinion of the medical examiner, which takes time”.

Amnesty International dismissed Iran’s investigation and called on the world to take “meaningful action” against the bloody crackdown.

“UN member states must go beyond toothless statements, hear the cries for justice from victims and human rights defenders in Iran and urgently set up an independent UN investigative mechanism,” said Heba Morayef, its director for the Middle East and North Africa. 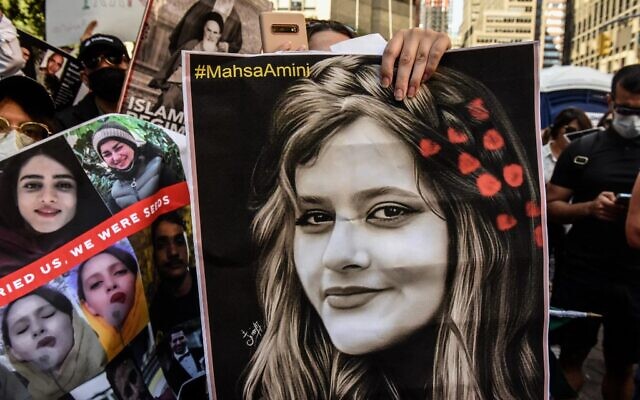 People participate in a protest against Iranian President Ebrahim Raisi outside of the United Nations on September 21, 2022, in New York City. (Stephanie Keith/Getty Images/AFP)

Iran has imposed tough restrictions on the use of the internet in a bid to hamper protesters gathering and stop the flow of images of the backlash from reaching the outside world.

The United States announced Friday it was easing export restrictions on Iran to expand internet services.

The new measures would “help counter the Iranian government’s efforts to surveil and censor its citizens,” said US Secretary of State Antony Blinken.