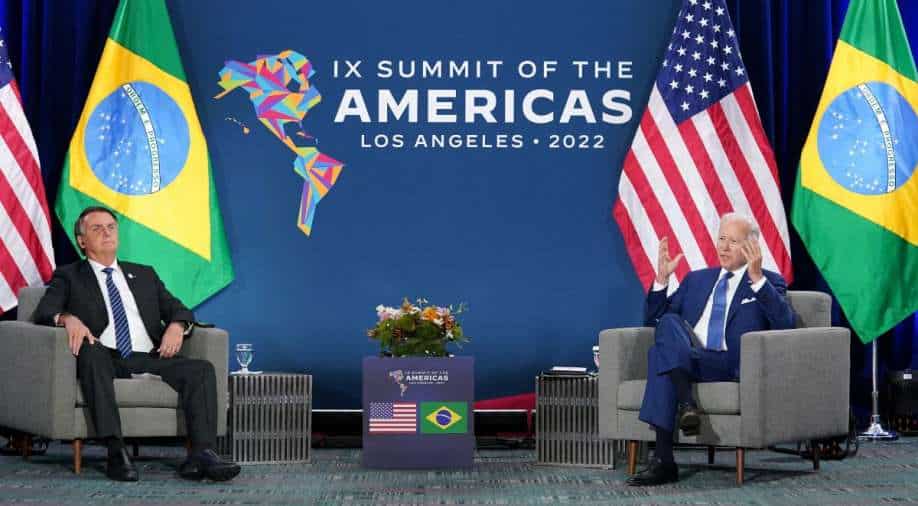 Brazil’s Jair Bolsonaro said that the United States and Brazil should look for closer ties as the two countries have drifted apart for ideological reasons. The comments were made during Bolsonaro’s first official meeting with the US counterpart Joe Biden on Thursday. Both leaders met on the sidelines of the Americas summit in Los Angeles to reaffirm the strategic importance of the relationship between the United States and Brazil.

Bolsonaro said, “We have a huge interest in getting closer and closer to the US. At times, we’ve distanced ourselves due to issues of ideology. But I’m sure that since our arrival in the Brazilian government we’ve never had greater opportunities because of the affinities that our governments have.”

After the meeting, the White House said that the partnership between the United States and Brazil is vital to international efforts to address the climate crisis, and ensure peace.

Biden and Bolsonaro also agreed to work together on preventing further deforestation of the Amazon and also agreed to coordinate at the United Nations Security Council over the ongoing crisis in Ukraine.

The meeting was crucial even though Bolsonaro, who is a populist and admirer of ex-president Donald Trump, and Biden appeared to avoid eye contact while listening to each other via a translator.

Recently questions were raised over the merits of the meeting as Bolsonaro on Tuesday praised Trump and even called Biden’s election “suspicious”.

The meeting appeared to be a step forward in the US-Brazil relation as the leaders pledged to continue their ongoing collaboration on trade and commercial matters.

Bolsonaro also complained to Biden about international pressure over the Amazon. “We have a wealth in the heart of Brazil — our Amazon, which is bigger than Western Europe, with incalculable riches, biodiversity, mineral wealth, drinking water and oxygen sources,” Bolsonaro said.

“Sometimes we feel that our sovereignty is threatened in that area but Brazil preserves its territory well. On the environmental issue we have our difficulties but we do our best to defend our interests,” he added.