Just under half of the US Senate’s Democratic caucus on Thursday called for the Biden administration’s “direct involvement” in the investigation into the killing of Palestinian-American journalist Shireen Abu Akleh in the northern West Bank last month.

“We believe that, as a leader in the effort to protect the freedom of the press and the safety of journalists, and given the fact that Ms. Abu Akleh was an American citizen, the US government has an obligation to ensure that a comprehensive, impartial, and open investigation into her shooting death is conducted — one in which all parties can have full confidence in the ultimate findings,” reads their letter to US President Joe Biden.

The initiative was spearheaded by Maryland Sen. Chris Van Hollen and signed by 22 other Democrats along with Vermont Sen. Bernie Sanders, an independent, representing 24 out of 50 senators in the Democratic caucus.

Abu Akleh was killed during clashes between Israeli soldiers and Palestinian gunmen during an IDF raid in the Palestinian city of Jenin on May 11. The Palestinian Authority says the veteran Al Jazeera reporter was intentionally gunned down by Israeli troops.

Israel flatly rejects accusations troops targeted the reporter, and argues it cannot determine who fired the fatal shot if the Palestinian Authority doesn’t hand over the bullet, which it refuses to do. Ramallah this week called on Israel to turn over the weapon suspected to be involved.

“It is clear that neither of the parties on the ground trust the other to conduct a credible and independent investigation,” the senators wrote in their letter to Biden. “Therefore, at this point, we believe the only way to achieve that goal is for the United States to be directly involved in investigating Ms. Abu Akleh’s death.”

The lawmakers expressed skepticism regarding the Israeli account of the incident, citing testimony from one of Abu Akleh’s colleagues who said the group made sure to stand in front of the IDF convoy and were wearing press jackets and helmets so the soldiers would know they were not combatants.

The letter also highlights the independent investigations of multiple media outlets that concluded Israeli soldiers were likely responsible for Abu Akleh’s killing. The New York Times this week joined the Washington Post, the Associated Press and CNN in reaching that conclusion.

Today, 24 of us are calling upon @POTUS to ensure direct U.S. involvement in the investigation into the shooting death of American journalist, Shireen Abu Akleh, so that all parties can have confidence in the findings and to ensure accountability. pic.twitter.com/HqwOFm4zg0

“Israeli authorities have said that Ms. Abu Akleh was killed in an exchange of fire between Israeli forces and Palestinian militants… but [the media outlet investigations] concluded that there was no Palestinian gunfire emanating from the location of the shooting at the time of Ms. Abu Akleh’s killing,” the letter said.

“We know you agree that journalists must be able to perform their jobs without fear of attack,” the lawmakers wrote to Biden. Among the signatories were senators Tammy Duckworth, Dick Durbin, Tim Kaine, Amy Klobuchar, Patrick Leahy, Ed Markey, Chris Murphy, Brian Schatz, Jeanne Shaheen, Elizabeth Warren and Raphael Warnock.

Getting wind of the letter before its publication, AIPAC scrambled to block it, sending lawmakers talking points that criticized the initiative as biased against Israel. The pro-Israel lobby’s response — first reported by Haaretz and later seen by The Times of Israel — insisted that the circumstances of Abu Akleh’s killing remained unclear, whereas the letter “implies both Israeli culpability and inability to conduct an objective, thorough investigation of the incident.” 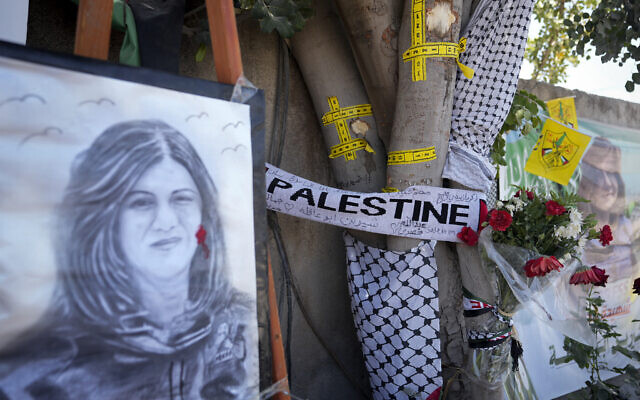 Yellow tape marks bullet holes on a tree and a portrait and flowers create a makeshift memorial at the site where Palestinian-American Al-Jazeera journalist Shireen Abu Akleh was shot and killed in the West Bank city of Jenin, on May 19, 2022. (AP/Majdi Mohammed)

The lawmakers face an uphill battle as the Biden administration has thus far focused on encouraging the parties to share their evidence with each other, rather than getting involved in the matter. An administration official told The Times of Israel last month that the US would not open its own investigation into the matter.

Thursday’s letter was the latest in a growing list of Congressional attempts to weigh in on the incident.

Earlier this month, Democratic Sen. Jon Ossoff and Republican Sen. Mitt Romney penned a letter to Secretary of State Antony Blinken calling on the US to ensure a transparent investigation into the killing.

Last month, 57 Democrats in the House of Representatives called for an FBI investigation, suggesting that Israel was likely the responsible party. Days later, a bipartisan letter from 25 House members demanded an investigation, but blamed the Palestinian Authority for hindering a thorough probe with its refusal to hand the bullet to Israel.