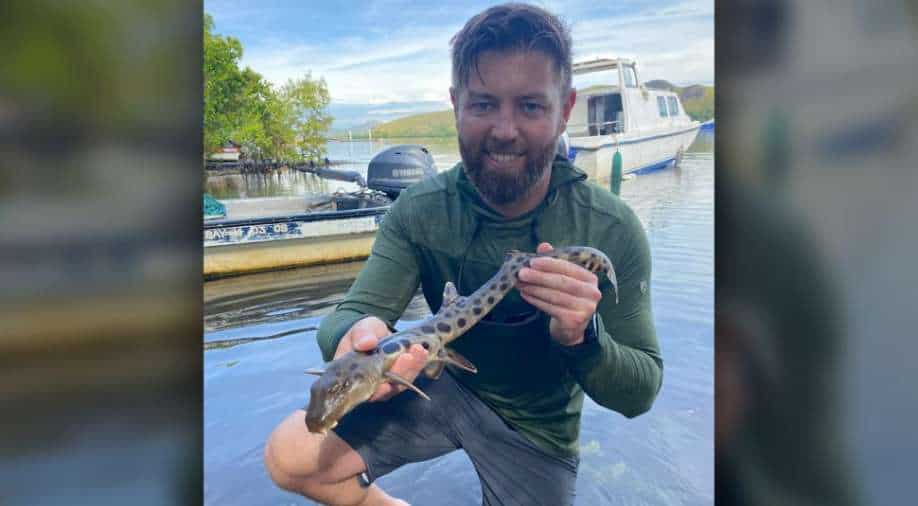 The discovery of super rare “walking sharks” in Papua New Guinea has astounded scientists. Called epaulette shark—also known as Hemiscyllium Ocellatum— it is unique among shark species as it has the ability to walk on land. The creature was spotted on the coast of the island on May 3 this year.

Conservationist and biologist Forrest Galante recently shared the rare footage of this unusual species for Discovery Channel’s new Shark Week episode called “Island of the Walking Sharks. He had travelled to the coral reefs of the Solomon Islands and Papua New Guinea to investigate rumors of a new species of walking shark.

“This is the first time in history one of the Papuan species of epaulettes has been documented walking,” Galante said on the show.

“This is so incredible.”

In the video, the tan-and-black-speckled shark was seen using its fins to drag itself across a tide pool that contained barely enough water, moving like a lumbering sea lion as it dragged its body across the shore.

Scientists believe that the epaulette sharks, which are found throughout the southern coast of New Guinea and the northern coast of Australia, evolved the ability to walk because it helped them search for food in environments which were inhabitable to other sharks.

“All traits are selected for when it allows [a species] to survive better and eke out an environment where they’re safe and can get food,” Gavin Naylor, director of the Florida Program for Shark Research at the Florida Museum of Natural History in Gainesville, told Live Science.

Epaulette sharks grow about 3.3 feet (1 metre) in length and swim in shallow coral reefs to hunt for their preferred food—crabs and other invertebrates.

When the tide recedes, they can be seen hanging out in tide pools and chomping off on these creatures.

“But once they’re done, they’re trapped. What epaulettes have learned to do is climb up in the reef and plop themselves in the next tide pool,” Naylor was quoted as saying.

According to a 2020 study published in the journal Marine & Freshwater Research, epaulette sharks are believed to have evolved the ability to walk in the past 9 million years, which the scientists claim is incredibly fast for sharks.