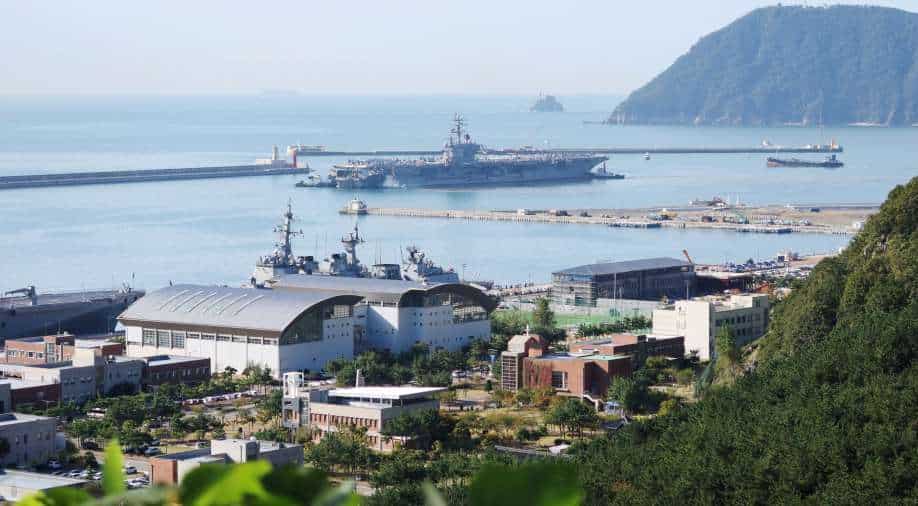 A US aircraft carrier arrived in South Korea on Friday for the first time in about four years, set to join other military vessels in a show of force intended to send a message to North Korea. USS Ronald Reagan and ships from its accompanying strike group docked at a naval base in the southern port city of Busan ahead of joint drills with South Korean forces.

Its arrival marks the most significant deployment yet under a new push to have more U.S. “strategic assets” operate in the area to deter North Korea.

Strike group commander Rear Admiral Michael Donnelly told reporters aboard the ship that the visit was designed to build allied relations and boost interoperability between the navies.

“We are leaving messaging to diplomats,” he said, when asked about any signal to North  Korea, but added that joint drills would ensure the allies were able to respond to all threats.

“It’s an opportunity for us to practice tactics and operations,” Donnelly said.

South Korean President Yoon Suk-yeol has pushed for more joint exercises and other displays of military power as a warning to North Korea, which this year conducted a record number of missile tests and appears to be preparing to resume nuclear testing for the first time since 2017.

North Korea has denounced previous U.S. military deployments and joint drills as rehearsals for war and proof of hostile policies by Washington and Seoul. The drills have also sparked protests by peace activists who say they raise regional tensions.

Last week, the United States said the carrier’s visit was a “clear demonstration” of its commitment to deploy and exercise strategic assets to deter Pyongyang and enhance regional security.

In announcing the visit, however, the US Navy made no mention of North Korea, referring only to a “regularly scheduled port visit” and emphasising crew members visiting Busan to volunteer at orphanages and explore the K-pop music scene.

Officials declined to provide details of the upcoming joint drills, but said the carrier would be in port for “several days.” Just hours after the ship docked, long lines of crewmembers formed as they took COVID-19 tests before being bussed into the city.

One crew member, who asked not to be identified because they were not authorized to speak to the media, said that they were looking forward to a break but that the geopolitical tensions were a constant presence.

“You can’t ever really forget what we’re all here for,” the crew member told Reuters.

The visit is the first to South Korea by an American aircraft carrier since 2018. Many drills were since scaled back or cancelled due to diplomatic efforts with North Korea or because of the COVID-19 pandemic.

The carrier visit is useful for political signalling, reassuring Seoul, and training with South Korean forces, but likely does little to further deter North Korea, said Mason Richey, a professor at Hankuk University of Foreign Studies in Seoul.

“A carrier group visit certainly doesn’t do much – in fact, it likely does the opposite – to discourage Pyongyang from developing more nuclear weapons and delivery systems, as well as conventional capabilities,” he said.

It nevertheless underscores that under Yoon the allies see tighter military coordination and interoperability as the best way to deal with North Korea, Richey added.

Questions have risen over the role the roughly 28,500 US troops stationed in South Korea might play if conflict erupts over Taiwan.

Donnelly said such questions are for policymakers above him, but said that operating with like-minded allies such as South Korea is a key part of the US Navy’s efforts to maintain the regional security and stability that has existed for more than seven decades.