Deborah Lipstadt’s first overseas tour as the Biden administration’s special envoy to monitor and combat antisemitism will start in Saudi Arabia, her office said Thursday, signaling the kingdom’s willingness to change its image in the West and among Jews.

Lipstadt, who was confirmed to the ambassadorial post in March, said in a briefing last week that Saudi officials were immediately receptive when she proposed the trip, which will also bring her to Israel and the United Arab Emirates, weeks before US President Joe Biden follows on a similar Middle East jaunt.

Her comments were only approved for publication Thursday when the 11-day trip was announced. She is set to leave for the Middle East on Monday.

Lipstadt described the trip as an opportunity to reach out to a nation that has a large influence on Muslim education worldwide because of its wealth and its status as the land of Islam’s holiest sites. Activists say education reforms are key to shifting attitudes toward Jews in the Muslim world.

“When a country with a long history of colored reactions… toward the Jews and Jewish history says ‘come, let’s talk,’… it would have been negligent [for me] not to come,” she said.

Lipstadt said she hoped to meet with political, religious and civil society leaders while in Riyadh.

“We’ll talk about all places where antisemitism has been embedded and their willingness to address it,” the US special envoy said.

Lipstadt said the Abraham Accords had created an opening to discuss the issues of antisemitism and Jewish history with Saudi officials and civilians. Riyadh was not a signatory to the 2020 normalization agreements Israel signed with other Gulf countries, but gave the move tacit backing.

She said she would talk to the Saudis “about normalizing the vision of the Jews, normalizing understanding Jewish history for their population and particularly the younger population,” she said. “I think it makes a statement about the change.” 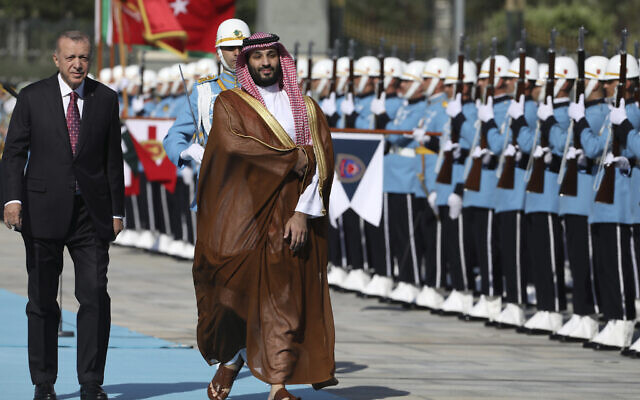 The envoy’s “engagements will emphasize promoting interfaith understanding, as well as combating intolerance and anti-Jewish sentiment,” her office said in a Thursday statement.

Much of the West and especially the Democratic Party establishment remains wary of Saudi Arabia and its de facto ruler, Crown Prince Mohammed bin Salman, because of its role in the bloody war in neighboring Yemen and the 2018 murder in Turkey of US-based journalist Jamal Khashoggi. Jewish groups harbor memories of the Saudis leading hostile anti-Israel and anti-Jewish policies through the 1980s.

Lipstadt’s trip will wrap just a few days before Biden is slated to travel to Israel, the West Bank and Saudi Arabia, where he will attend a meeting of the Sunni Arab Gulf Cooperation Council states plus Egypt, Jordan and Iraq, from July 13 to July 16.

Saudi Arabia has in recent months launched an intensive image-improving campaign, most notably setting up an alternative to the golf world’s PGA tour. It has also reached out in recent years to Jewish groups, last week hosting a group of 13 Jewish leaders, including six senior New York UJA-Federation leaders, for a short visit.

Lipstadt at her briefing also described a meeting she convened last week of her counterparts from around the world, including from Germany, the European Union, Israel, Britain and Canada. She said the exchange of ideas was fruitful and she hoped to convene it “regularly, every two, three months, four months.” “We can learn from one another,” she said. 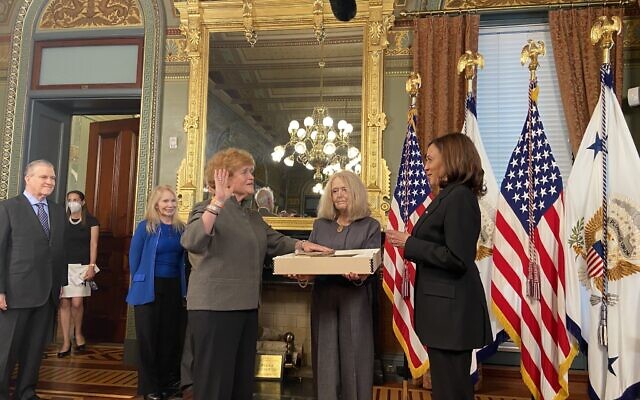 US Special Envoy to Combat and monitor Antisemitism Deborah Lipstadt is sworn in by US Vice President Kamala Harris at the latter’s office in Washington on May 24, 2022. (Jacob Magid/Times of Israel)

Lipstadt, who suggested that the Trump administration displayed fascistic tendencies while stumping for Biden in 2020, said at the briefing that it was critical to convey to populations how antisemitic theories portend trouble for all groups and for democracy. She also said the reverse is true — conspiracy theorists frequently end up embracing antisemitic tropes and endangering Jews.

She said her next trip later in the year would be to Argentina and Chile. In Argentina, she hopes to bring back into the spotlight the unresolved 1994 bombing attack on AMIA, the Jewish community center in Buenos Aires, which killed 85 people.

In Chile, she said, she will speak with Jewish community leaders who are “feeling under pressure” to criticize Israel since the election of leftist President Gabriel Boric.

Lipstadt said she had not yet begun engaging in talks with either Hungary or Poland, whose leaders have been accused of employing antisemitic dog whistles and white-washing their roles in the Holocaust.