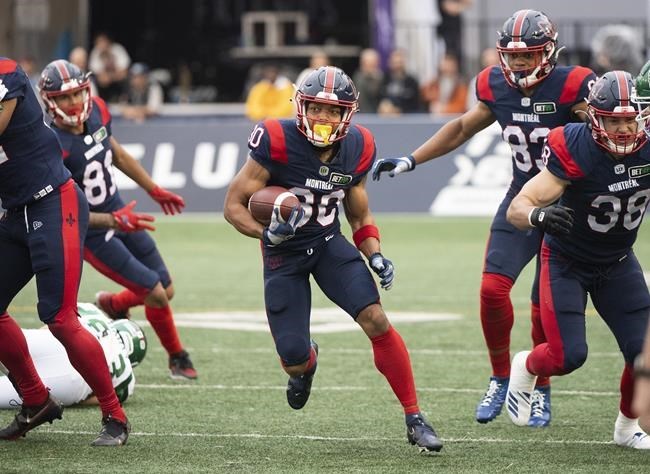 MONTREAL — The Montreal Alouettes scored in the first 15 seconds of play and never looked back on their way to a 37-13 win over the Saskatchewan Roughriders Thursday.

The Alouettes (1-2) had a complete effort in their home opener with the offence, defence and special teams recording touchdowns.

Saskatchewan’s Cody Fajardo had a tough day at the office, throwing for 191 yards and two interceptions, and was sacked seven times before being pulled in the fourth quarter.

Mason Fine came on in relief and tallied 83 passing yards for the Roughriders (2-1), with one touchdown and one interception.

The Alouettes started in explosive fashion with Chandler Worthy returned the opening kickoff for an 88-yard touchdown.

David Cote added to Montreal’s lead with two consecutive field goals, including a 48-yard kick that gave his side a 13-0 lead at the end of the first quarter.

The Roughriders broke the ice at the start of the second with a 41-yard field goal by Brett Lauther.

But Montreal answered right away with Harris’ first touchdown pass of the season. The veteran threw a 70-yard bomb for Kaion Julien-Grant on the next play increasing the Als’ lead to 20-3.

Saskatchewan attempted a scoring drive to start the second half but Montreal’s defence held the Riders in the red zone, limiting the visitors to a field goal.

Cote recorded his fourth and fifth field goals of the game and recorded a single in the fourth quarter to bring the score to 37-6.

The Riders scored their lone touchdown of the night in the dying embers of the game when Fine found Williams with a five-yard pass.