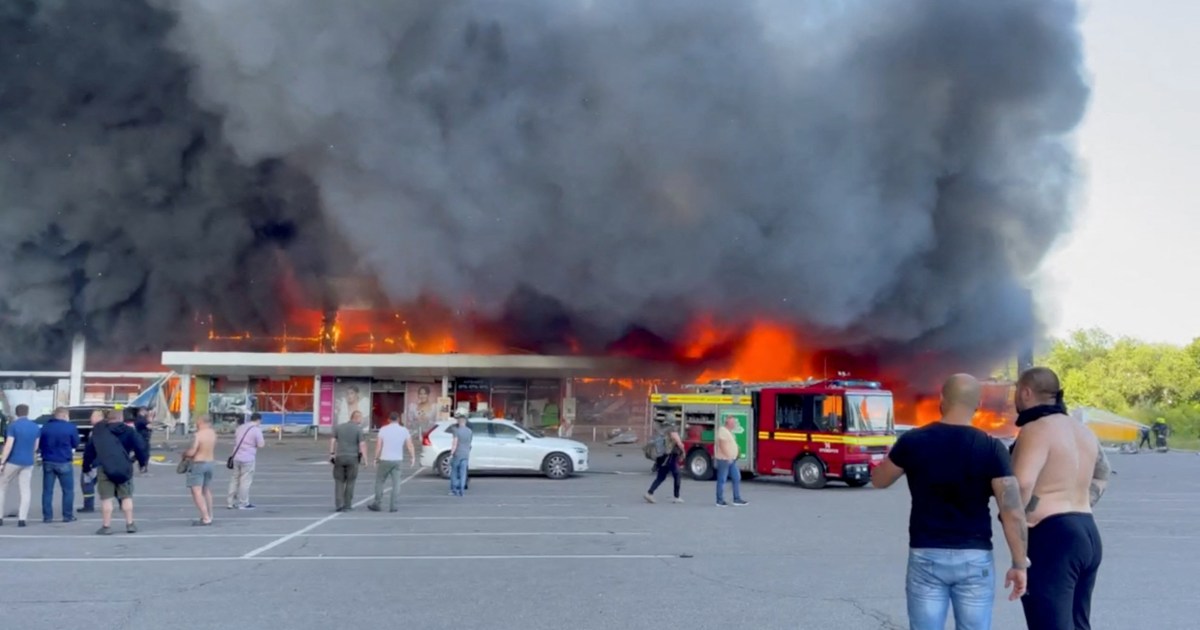 Dmytro Lunin, governor of the central Poltava region, wrote on Telegram that 11 people had now been confirmed killed in the double missile strike on the crowded shopping centre, adding that rescue workers would keep searching through the smouldering rubble, with more bodies likely to be found.

“It’s an act of terrorism against civilians,” he said separately, suggesting there was no military target nearby that Russia could have been aiming at.

Firefighters and soldiers were seen removing mangled pieces of metal as they searched for survivors.

“We don’t understand how many people could be remaining under the rubble,” the regional rescue service chief said on television.

Another act of the russian genocide of the Ukrainian people. This time the ruscists targeted a mall in #Kremenchuk, in the afternoon when it is always especially crowded. The war criminals wanted to kill the civilians, deliberately aiming for the maximum number of casualties. pic.twitter.com/3PbCnjc7PU

Zelenskyy said the shopping centre presented “no threat to the Russian army” and had “no strategic value”. He accused Russia of sabotaging “people’s attempts to live a normal life, which make the occupiers so angry”.

“Russia continues to take out its impotence on ordinary civilians. It is useless to hope for decency and humanity on its part,” he said.

Al Jazeera’s Charles Stratford, reporting from Kyiv, said about half of those wounded were receiving treatment in hospital.

“Ukrainians are saying that there were no strategic targets that could have been aimed at in this attack,” Stratford said.

“What we do know is that the city’s bridge yesterday was hit by a Russian shell, according to the Ukrainian military, and at least one was killed and five others injured.”

Describing “terrifying pictures” of flames and smoke billowing from the shopping centre, Stratford said “the Kremlin tells the world that they are trying to avoid civilian casualties in this war.

“Kremenchuk is about 200km from the southern front line, and similar kind of distance to the east,” he said.

Mayor Vitaliy Maletskiy wrote on Facebook that the attack “hit a very crowded area, which is 100 percent certain not to have any links to the armed forces”.

The attack prompted condemnations from Ukrainian officials across the board, including foreign minster Dmytro Kuleba, who called for more heavy weaponry to be sent to Ukraine and further sanctions on Russia.

Large shopping mall in Kremenchuk with hundreds of civilians inside has been hit by a Russian strike. Russia is a disgrace to humanity and it must face consequences. The response should be more heavy arms for Ukraine, more sanctions on Russia, and more businesses leaving Russia. pic.twitter.com/Uvi6fbyShK

Kremenchuk had so far been spared direct hits in the conflict, Guterres spokesman Stephane Dujarric said at a daily press briefing.

“Any attack that hits a shopping mall is totally deplorable,” the UN official said.

“We once again stress that the parties are obliged under international humanitarian law to protect civilians and civilian infrastructure,” he added.

UK Prime Minister Boris Johnson said the attack on the mall demonstrates the “depths of cruelty and barbarism” of Russian leader Vladimir Putin.

“Putin must realise that his behaviour will do nothing but strengthen the resolve that the UK and every other G7 country stand by the Ukraine for as long as it takes,” he said.

The attack came as Russia was mounting an all-out assault on the last Ukrainian stronghold in eastern Ukraine’s Luhansk province, “pouring fire” on the city of Lysychansk from the ground and air, according to the local governor.

Russian forces appear to be stepping up longer-range attacks on the country after forcing Ukrainian troops out of the neighbouring city of Severodonetsk in recent days.

NATO will agree to deliver further military support to Ukraine – including secure communication and anti-drone systems – when its leaders convene in Spain for a summit on Tuesday, according to the military alliance’s secretary-general, Jens Stoltenberg.

The battle for Severodonetsk and Lysychansk is part of a stepped-up Russian offensive to take control of the broader Donbas region from Ukraine.