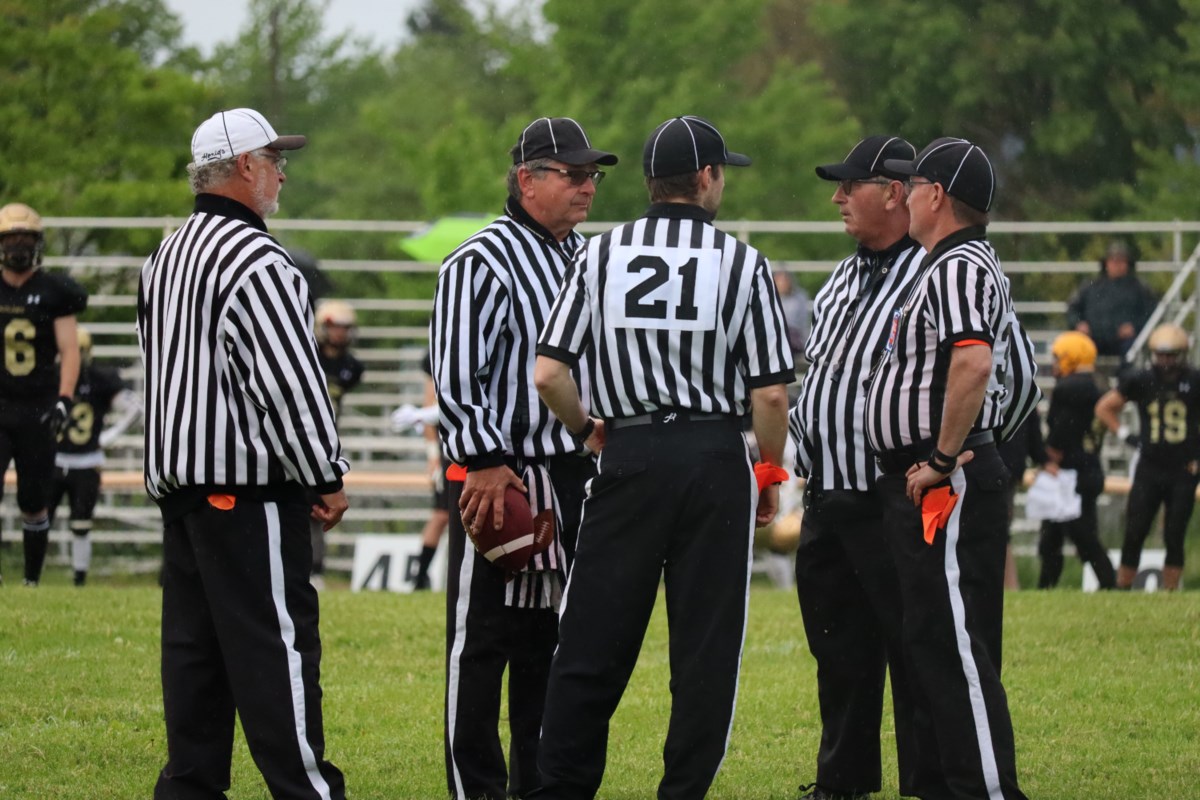 The Northern Football Conference has issued “significant suspensions” to two Tri-City Outlaws players for remarks made on social media since their controversial June 11 game against Sault Steelers.

Some of the posts of concern to league officials refer specifically to the June 11 game, which had to be called off at half-time when the field lights failed at Rocky DiPietro Park.

However, the NFC’s disciplinary committee did not link the suspensions to bizarre edits of the City of Sault Ste. Marie’s Wikipedia page that replaced the city motto with “Go Outlaws” and Sault Mayor Christian Provenzano’s name with that of Christopher Newsome, long-time coach of the Tri-City Outlaws football club.

“The NFC executive has been overly busy dealing with some issues related to abusive use of social media to attack other members of the NFC, executive members in manners that harm the NFC,” said Marc Lathon, secretary to the semi-pro league, in an email to member teams.

“Please relay to your players that you, along with the rest of the NFC membership want the NFC to continue to improve its image and terrible behavior won’t be tolerated,” Lathon said, adding: “Let’s work together to stop this stuff!”

One of the suspended Tri-City players is defensive back Dave Cuthbertson.

The NFC disciplinary committee found Cuthbertson had violated the league’s code of conduct by making “multiple posts on public social media in connection with the electrical failure causing the lights to not operate at Rocky DiPietro field, that did nothing to advance Tri-City’s position on the matter but was found to be excessively negative and disparaging to the NFC and its member club, the Sault Steelers.”

The NFC also reviewed complaints of poaching players from other teams and accusations that one league team was paying players, and suspended Cuthbertson for three games.

“Dave Cuthbertson is hereby suspended for three games and this suspension carries with it a requirement for Dave Cuthbertson to write and deliver an apology letter to the persons subject to the remarks,” the NFC concluded.

“Although his suspension is for three games, he will remain suspended until these letters are shown to the executive to have been delivered to the appropriate people.”

“On a final note, any further violation of the code of conduct by Dave Cuthbertson will carry with it further suspensions, but more importantly a review of his eligibility to play NFC football in the future will be put to the NFC membership at the fall meeting,” the league said.

The other suspended Tri-City player is defensive back Jake Egers.

Egers was suspended from his season opener because of social media activity.

He apologized to the league at that time and his suspension was reduced to just the one game.

“Recently, without any provocation at all, in response to the event that took place in the Sault where a malfunction of the field lights caused the game to be cancelled at half time with both teams tied at 13, Jake Egers was once again on social media making disparaging comments towards the league,” said the NFC.

“Specifically, In the first post Egers referred to the Northern Football Conference as ‘… in the bushyest of leagues man…'”

“In the second post Egers referring to the weekly power ranking posts on the NFC Facebook page he writes: ‘posting records while there’s a game under protest is all time beer league sh*t,’ followed by a comment intended to refer to the league’s efforts: ‘…I feel you. Stuck in reverse.’

Like Cuthbertson, Egers has been warned he must deliver an apology letter before his suspension can be lifted, and he’s also at risk of further suspensions or losing his NFC eligibility.

NFC’s disciplinary notices made no reference to the rogue posts on Wikipedia, which started on June 9, two days before the cancelled game against Sault Steelers.

The Wikipedia edits were worrisome because Christian Provenzano’s name was removed as the Sault’s mayor, and replaced with that of Outlaws coach Christoper Newsome.

But anyone clicking on Newsome’s name on Sault Ste. Marie Wikipedia page found themselves reading an article titled Murders of Channon Christian and Christopher Newsom describing a brutal 2007 carjacking, rape and double torture/murder that occurred in Knoxville, Tenn. on Jan. 6, 2007.

SooToday reached out to coach Newsome by email but didn’t receive a response from him.

The Wikipedia edits were quickly corrected by an employee of the city clerk’s department after SooToday noticed and wrote about them on June 15.

The following day, the page was locked by Wikipedia for “persistent vandalism,” preventing further edits for seven days.

Jonathon Bujold, Sault Steelers general manager, said he was immediately contacted by the league president about a SooToday article about the edits.

“He said: ‘Did you read that article? There’s no coincidence. This is them at it again. I’ll talk to the league. Maybe you let [SooToday] and the mayor know there’s no danger to his life and we’re pretty confident and know what this is,'” Bujold told SooToday.

“I just know, with our city, the association with the Outlaws isn’t nothing, if you don’t know what’s going on,” Bujold said.

He reached out to the mayor that day, saying: “Don’t misconstrue it as a threat. There’s nothing serious here.”

“He just kind of answered me back and said thanks for clarifying that. And then commented on the field lights situation that we had here and apologized and said the city’s excited that they were able to address that quickly.”

“But as far as the actual article, if he did have any anxiety or concerns about it, he didn’t explain that to me.”

Bujold said the league was unable to pin the Wikipedia ‘vandalism’ on any specific player.

“I think the article played a part in their suspension,” he told SooToday.

“I think they were less forgiving with the penalties, based on the amount of things that were piling up.”

Whoever it was that placed the rogue edits on Wikipedia probably didn’t know that “we have prominent Outlaw gang members here in the city that might be associated with that. They were just totally ignorant of what it could have been perceived as,” said Bujold.

“Obviously, there’s no specific player we can attach to it. But the league was hearing several things regarding a couple of Tri-City players. Those players have already been suspended for quite an amount of time,” he said.

Meanwhile, the city has issued a call for tenders for supply and installation of new field lighting for the John Rhodes Community Centre, home of the Sault Steelers.

The deadline for tenders is noon on Wednesday June 29.

“The work generally consists of removal and disposal of existing fixtures, and supply and install of high-mast field lighting,” the tender request says.