Four Israelis hurt in a deadly crash in Georgia were brought Saturday to Israel, where they were taken to local hospitals for further treatment.

According to the Foreign Ministry, one of the injured Israelis was expected to be released later in the day and an assessment would be held regarding the medical conditions and further treatment of the other three.

The three others were listed as lightly injured.

Another two Israeli women seriously hurt in the crash remained hospitalized in Georgia, according to the Ynet news site.

Two Israeli tourists were killed in the crash, in which some 15 people were also injured. The Foreign Ministry has not specified how many of those hurt were Israeli.

The crash near the Georgian city of Batumi occurred days before the Jewish New Year, with many Israelis traveling for the holiday.

The ministry also said Saturday that Israeli Ambassador Hadas Meitzad and other embassy officials were in touch with the Israeli medical teams and family members who traveled to Georgia. 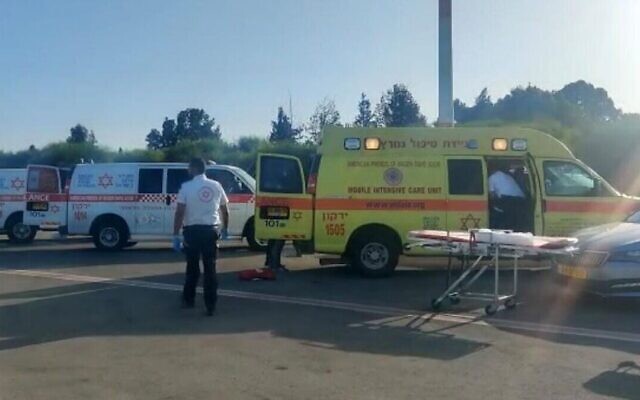 Ambulances are seen parked at Ben Gurion Airport for the arrival of four Israelis injured in a deadly car crash in Georgia, September 24, 2022. (Magen David Adom)

The crash occurred when a minibus the Israeli tourists were riding in collided with another vehicle in southern Georgia, which has become an increasingly popular tourist destination for Israelis in recent years, drawn by the hiking and its spectacular mountain scenery.

In October 2016, two Israeli children were killed and four other members of the same family seriously injured when the car they were in plunged into a gorge in the remote mountainous Tusheti region in the northeast part of the country during a storm.