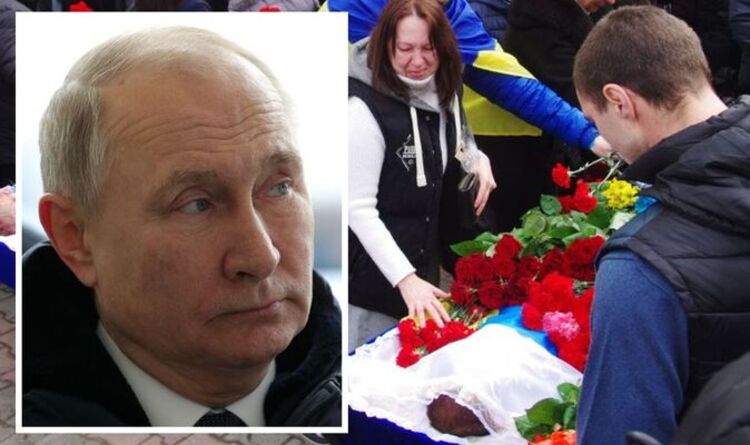 The news comes after Russian forces claim to have captured the port, with over 1,000 Ukrainian troops surrendering. After allegations of genocide following Russia’s withdrawal from Bucha, reports indicate similar scenes may be found in Mariupol. Now, residents of the city claim Russian troops are attempting to hide the evidence of civilians deaths by removing the bodies.

The city of Mariupol council said in a Telegram message: “A watchman has been assigned to each courtyard and is not allowing Mariupol residents to lay to rest dead relatives or friends.

“Why the exhumation is being carried out and where the bodies will be taken is unknown.”

The allegations made on the social media platform have yet to be independently verified, but offer more evidence towards war crimes being committed.

The mayor of Mariupol claimed Russian soldiers were taking dead bodies to a large shopping complex with cold storage units.

He said: “Mobile crematoriums have arrived in the form of trucks: You open it, and there is a pipe inside and these bodies are burned.”

Mariupol has become the centre of focus for Russian advances as it seeks to complete its ambition of building a land-bridge between the mainland and the already annexed Crimea.

However, the recent sinking of the Russian warship “Moskva” has infuriated leaders in Moscow.

Analysts now believe Putin’s forces are regrouping for the second stage of the so-called “special operation”.

This appears to involve a surge on the Eastern front of Ukraine, with attacks coming from the East and South to fully liberate the Donbas region from Ukrainian forces.

Does this amount to further war crimes by Russian forces? Will the fall of Mariupol trigger an end to the war? Should Putin be put on trial for war crimes? Let us know your thoughts by joining the debate in our comments section below, just CLICK HERE to share your views – Every Voice Matters!

With Russia suffering heavy losses in the centre and north of Ukraine, experts suggest the next stage of the war will involve Russia relying heavily on its dominance in the skies.

Reports have emerged suggesting Russia may escalate their attack through the use of chemical weapons.